Libya - Everyone is complaining but isn't that a good thing? Layla El-Wafi

‘There is an overwhelming will not to let the past
injustices and wounds of the recent conflict  defeat the efforts to
transform the country to a modern and moderate country.’

Libyan lawyer Layla El-Wafi sent me this e-mail on her impressions of life in Tripoli.  Layla recently returned from a week long visit to Tripoli for business
meetings and to catch up up with family, friends and activists.
She is (cautiously) optimistic about the future.

Getting around is challenging due to traffic jams caused by many new
cars on the road, closed off streets and a legacy of poor urban
planning/infrastructure. But it also offers a chance to catch all the
signs and graffiti promoting messages of re-conciliation,
voting/participation and expressing contempt for a brutal dictator who
outlawed any public displays save for his image. 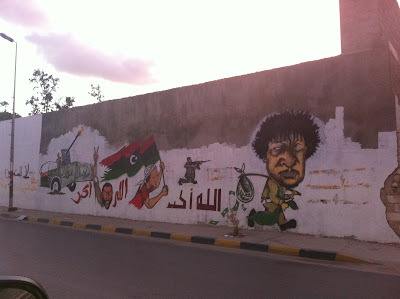 My Favourite Ice Cream and Business Opportunities!
It is clear that business opportunities are plentiful with new retail
and food stores (including my childhood favourite ice cream chain
Carvell!),  banks and private schools opening even since my last visit
6 months ago (American, British, Gulf based, Turkish and other).
However security and political instability have limited this. One
business consultant said foreign companies have waited by the side
lines til new ministers were appointed (a stop/start process for those
who have followed it closely) and another business contact said the
lack of full law and order have limited his company sending in foreign
employees and investing more resources.

I noticed more people begging on the streets than I have in the past. This is a shame in what is meant to be the richest country in Africa per capita.  There are

luxury cars on the road reflecting that wealth - although some of this
through unfair enrichment and this is a controversial topic. 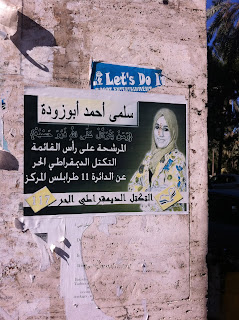 Women
Women are very much active in the public sphere. On a visit to
my bank I noticed that most of the employees - including management - were women. All wearing the veil (not clear if
social pressure and a way to make life easier) and all very assertive!
Women activists are involved in campaigning on many issues including the forthcoming constitutional drafting process to raise awareness across the country touring towns and villages and lobbying the President/Congress members to ensure public consultation and women's rights are factored in. A poster hung off a bridge was a message by the Muslim Brotherhood party saying ‘men and women partners in rebuilding’. I also noticed signs in the language of minority ethnic group Amazigh for the first time.

Gun-shots
I could hear guns shots every night from my bedroom window although
noticed less arms on the streets.  I was saddened by news that a
distant relative was shot dead in what seems to be a Revolution
related grievance (but they shot his wife in the car instead of him).
Another cousin's husband's construction company machinery was stolen.
Both incidents in the south of the country where security is even more
of a problem than in large coastal cities due to border control issues
and less policing resources.

Media
I was encouraged by the many TV show debates and news programs
covering issues relating to the General National Congress' decisions,
debating the role of new media (should there be a ministry or a non
governmental regulator/body?!), reporting on a ten day campaign to end
violence against women and a vigil held by activists in the eastern
city of Benghazi. News reports are following local developments in
neighboring countries Tunisia and Egypt closely.  Another show spoke
of the brutal killing of a man during last year's revolution. Just one
of many sad stories that people are still coming to grips with. It is
very apparent that people are suffering from post traumatic stress and
still hold grudges from last year's events including between family
members.  The people from the town of Thawerga are still not able to
return due to tensions from neighboring city Misrata; people are
questioning why the attacks against the town of Bani Walid were not
fairly reported; and some are questioning the influence / motives of
foreign powers like Qatar and NATO countries who supported the
revolution. Yet there are so many gestures of openness towards the
outside world,  kindness, community spirit and positivity  from
neighbors, friends and the active new media and civil society
flourishing across the country.   I still felt a sense of safety and
normality - as I did when I visited 6 months ago and then 6 months
before that.

Common remarks and hopes from people reflect a desire for safety and
security first, services and infrastructure, fair distribution of
wealth and for democratic institutions which they can openly
criticize. There is an overwhelming will not to let the past
injustices and wounds of the recent conflict  defeat the efforts to
transform the country to a modern and moderate country.