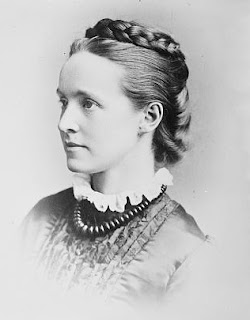 Salute to Dame Millicent Fawcett DBE
President of the -The National Union of Women's Suffrage Societies (NUWSS) 1897 until 1919.

Millicent Fawcett campaigned within the law which is why she is less well known today than the Pankhursts' suffragette movement. As a campaigner myself for women's rights I can truly say that the scale of Millicent Fawcett's achievement, her tenacity  and determination is absolutely awesome. Millicent Fawcett was President of The National Union of Women's Suffrage Societies (NUWSS) 1897 until 1919.
The NUWSS was fifty times bigger than the militant suffrage movement - the Women's Suffrage and Political Union (WSPU)with only some 2,000 members. Millicent Fawcett's suffrage union had 500 local branches and over 100,000 members. They held over 300 public meetings per week and massive peaceful marches, organised petitions, wrote letters.  Millicent Fawcett Millicent Fawcett was an exceptionally capable organiser, mobiliser and fund-raiser for 'the cause'. She used constitutional methods. Her approach was to use reason an/d patience, based on persistent lobbying and public education.
Millicent Fawcett was one of the vintage generation of women activists who brought about reforms for women's  lives that impact on us today.    One of the scenes in history that I would most like to have witnessed is a scene in 1860 at the Garrett family home - Alde House, Aldeburgh. In front of the bedroom fire, three girls were brushing their hair. They were two sisters : Elizabeth and Millicent Garrett, and their friend, the famous feminist Emily Davies. Emily was 29,  Elizabeth 23 and Millicent 13. As they brushed their hair they chatted: "Women can get nowhere", said Emily, "'unless they are as well educated as men. I shall open the universities." She did it. In her life Emily Davies succeeded in opening up access to women for university   - including founding Girton College College.

Elizabeth looked at her younger sister and said, "But what shall we do with Milly?"  They agreed that Millie should get the parliamentary vote for women. Millicent too succeeded in her allotted life- task.
Millicent  (Garrett) Fawcett  campaigned for over 60 years from 1857 until 1928 -  for women to have the right to vote and to stand for parliament and to have full  rights as equal citizens with men.  She was author a number of publications. Her: 'Political Economy for Beginners' became a bestseller with ten editions in twenty-five years.

Shameful behaviour of Gladstone, Churchill and Asquith
In giving her entire adult life to the great cause, fighting every day for votes for women, she and her suffragist supporters  were endlessly mocked, derided and treated with contempt by these pillars of the British Establishment The great political 'A' List celebrity beasts who are so revered today, Gladstone, Winston Churchill, Asquith and their colleagues have a shameful record of duplicity and arrogance. These men in no way behaved as democrats.
For daring to ask for democracy - the right for half the population to have a say in who governs Britain  Millicent Garrett Fawcett and her fellow suffrage campaigners were the butt of ribald humour, adverse press comment, and duplicity.  The very mention of the word 'women' in the House of Commons produced laughter and derision. In a debate in the House of Commons, Liberal MP Labouchere said - "it would be as useful to extend the vote to rabbits as to women!"
Despite being tricked and trivialised by Gladstone, Asquith  Winston Churchill and their colleagues,  year after year Millicent sat patiently in the lobby of the House of Commons waiting for appointments with Ministers and Members of Parliament. I think it would be a fitting and ironic tribute for a bronze statue of Millicent Fawcett sitting on one of the benches in Central Lobby……….similar to the bronze figures of Churchill and Roosevelt who sit on a bench in Bond Street.

Having a blind husband turned out to be a great asset in learning about politics
Three other men played a pivotal role in Millicent Fawcett's life - the first was her Father -  the second was  Radical MP and philosopher John Stuart Mill
and the third was her husband Henry Fawcett, an economics professor at Cambridge who was also a Liberal MP. He had been blinded in a shooting accident when he was aged 22.
The result of her having worked alongside her blind husband in his political activities  meant that after his early death in 1884,  Millicent Fawcett was the only woman in the early suffrage movement  who understood how to wheel and deal with politicians - how to choose the right people to lobby and how to approach them. At this time in Victorian England it was not considered proper for a woman to speak on a platform at a public meeting. The partnership with her blind husband gave Millicent  the chance to learn the trade of politics. Because of Henry's condition, Millicent Garrett Fawcett served as his amanuensis, secretary, and companion as well as his wife. The husband and wife team of Henry Fawcett and Millicent Garrett Fawcett  was similar to that  of their mentor  John Stuart Mill and his platonic love, (and later wife) Harriet Taylor. Besides being among the leading feminists of their time, the two women provided both intellectual stimulation and feminine perception of the highest degree to their partners.

World War 1 and Lloyd George
Millicent Garrett Fawcett  supported the British war effort in World War I, believing that if women supported the war effort, suffrage would naturally be granted at the end of the war. In the  London Suffrage Society's case this was  mainly through the setting up of the Women's Service Bureau, to place women both as volunteers and into essential paid war work -which included ambulance drivers, medics, the setting up of training schemes for women welders and munitions workers.  This war work contributed to their main purpose - with increased activity in Parliament in 1917 around the Representation of the People Bill.
In March 1917 Millicent Fawcett led a deputation that included representative of 24 women's suffrage societies to see new Prime Minster, Lloyd George and in February

Victory in 1918. Parliament passed the Representation of the People Act.
The Representation of the People Act allowed the vote, to women with property over the age of 30.
After a struggle of  52 years Millicent returned home to Gower Street from the House of Lords, triumphant from witnessing the victory of Women's suffrage. The press flocked to her home. A journalist knowing of her fifty years association with the movement, asked her to describe briefly its 'ups' and 'downs'. She replied that  it had been all 'ups' and no 'downs.'  He looked perplexed and incredulous. Millicent Fawcett continued with words that I feel best sums up the progress since the 1950s….
She said : "The history of the women's movement  for the last fifty years is the gradual removal of intolerable grievances. Sometimes the pace was fairly rapid; sometimes it was very slow ; but it was always constant , and always in one direction. I have sometimes compared it, in its slowness  to the movement of a glacier; but like a glacier it  was ceaseless and irresistible.  You could not see it move, but if you compared it with a stationary object and looked again after an interval of months or years, you had proof positive it had moved. It always moved in the direction of the removal of the statutory and social disabilities of women. It established their individual liberty and freedom; they were in fact passing from subjection to independence . That is why I said the history of the movement has been all 'ups' and no 'downs. "

Millicent Garrett Fawcett turned over the NUWSS presidency to Eleanor Rathbone, as the organization transformed itself into the National Union of Societies for Equal Citizenship (NUSEC) and worked for lowering the voting age for women to 21, the same as for men.
In 1924, Millicent Garrett Fawcett was given the Grand Cross of the Order of the British Empire, and became Dame Millicent Fawcett.

Until her death Millicent continued to campaign for votes for women on the same basis as men including - in her 80s -  taking part in the famous Mud March in Hyde Park.

She died in London just months after women got the right to vote on an equal basis with men in 1929.

Millicent Fawcett  earned the words on the memorial she shares with her husband in Westminster Abbey. The words say : "A wise, constant and courageous Englishwoman who won citizenship for women."
(Dame Millicent Fawcett DBE - June 11, 1847 - August 5 1929)