UK takes action to prevent the use of rape and other forms of sexual violence as a weapon of war. First target countries: Syria, Mali, South Sudan, Eastern DRC and Bosnia-Herzegovina. 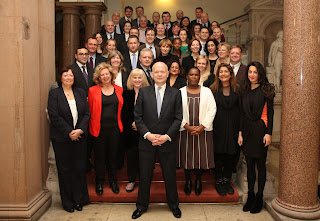 Prevention of Sexual Violence Initiative Team
The picture shows Foreign Secretary William Hague with members of the team of 73 experts made up of police officers, lawyers, psychologists, doctors, forensic experts, gender-based violence experts and experts in the care and protection of survivors and witnesses. (30 Jan 2013) Members of the team can be asked to go to conflict-affected countries to assist with investigations and prosecutions; to help with the care of victims and witnesses; and train local authorities. Each deployment will either support a UN mission; assist an NGO working on the ground; or be deployed at the request of the national authorities of that country. The experts will help local courts and prosecutors to address the backlog of war crimes cases and protect survivors and witnesses.

The Foreign Secretary said:
“The sad truth today is that the perpetrators of these appalling, life-shattering crimes still tend to go unpunished. Many hundreds of thousands of survivors live with the stigma, shame and burden, in many countries around the world. And their ranks are being added to all the time, including in Syria, where the number of refugees who have reported being raped is truly shocking.
This is a moral issue, because the individuals concerned have a right to justice and support, and because we must shift the stigma from the survivors of rape to the perpetrators. But it is also central to foreign policy, because sexual violence perpetuates division and conflict, undermining international peace and security.
We are determined to help shatter the culture of impunity for wartime rape, and to rally the world to do more to help survivors. We must overturn the age-old assumptions that rape is somehow an inevitable by-product of conflict; and confront its use in the same way that we have confronted slavery and are urgently seeking an International Arms Trade Treaty.
Syria, South Sudan, DRC, Bosnia-Herzegovina
We have already deployed part of the Team to Syria’s borders, to train local health professionals in how to respond to reports of sexual violence. We will expand this work this year, deploying a team again, in larger numbers, to help Syrian refugees and those working with them.
We will also deploy the Team of Experts to at least four other countries this year:
To Libya, to support survivors of sexual violence committed during the revolution; to South Sudan, to work with the UN and Government to strengthen local justice; to Eastern DRC to help doctors and lawyers investigate the cases of the hundreds of women and girls who are raped there each month; and to Bosnia-Herzegovina where thousands of women are still waiting for justice 20 years since the war. There, our experts will help local courts and prosecutors to address the backlog of war crimes cases and protect survivors and witnesses.
Responding to sexual violence needs to be built into every aspect of conflict prevention and peace-building work overseas, from development to peace-keeping.
Mali
So I can also announce today that we have offered members of the UK Team of Experts to the EU military training mission to Mali, to provide human rights training to the Malian armed forces on preventing and responding to sexual violence. This will be designed to enable them to better protect civilians and to act responsibly, particularly towards women.

G8
But we want the international community as a whole to do much more. So we aim to use the UK’s G8 Presidency this year to secure a clear statement of intent from some of the world’s most powerful nations to make real, tangible progress on this issue.
When I host the G8 Foreign Ministers in April here in London I will be asking for practical contributions of resources and capabilities, and support for a new International Protocol on the investigation and documentation of sexual violence in conflict. This is my personal priority during the G8.”[1]

Next speech I want to hear?  Commitment to ensuring at least 40% participation of women on all peace talks and post conflict transitional governments!
Full speech at : https://www.gov.uk/government/speeches/preventing-sexual-violence-initiative-uk-team-of-experts

[1] The G8, or "Group of Eight," consists of eight large world economic powers: Canada France Germany Italy Japan Russia United Kingdom United States The 39th G8 summit will be held in the  UK on 17th and 18th June 2013.
Posted by Lesley Abdela